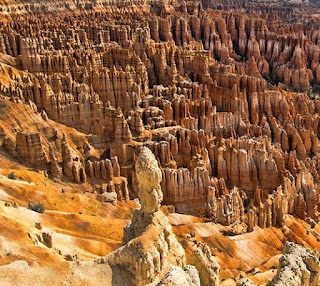 Kalino and Jessel used their giant lizard hide to drag everyone, and their equipment, away from the battlefield. They traveled on top of the canyon walls, so their movement was slow going and they often ran into deep canyons that were impassable. Jessel led them to a dead end canyon with a large rocky overhang to hide from the sun and scouts.
They laid everyone out and set up a temporary triage, with Jessel serving as their healer. Kalino nervously kept watch. When camp was set up and secure, Kalino laid down and fell asleep. Jessel barely managed to stay awake to keep watch.Day 22, Week 2, Fortuary, Friend's Vengeance, 190th King's Age, Sun Descending

Jessel woke Kalino before the sun had fully risen and apologized, because he had to go. Kalino understood and thanked him for his help. Kalino knew that they would have all died, if not for Jessel's timely assistance. Jessel opened a dimension door with the will, and stepped through.
Kiara regained consciousness that morning, as Kalino was cooking a bland breakfast of lizard meat. After she ate, Kiara petitioned her sorcerer king for spells and was granted them. She used the Lion of Urik's magic to heal the group. They were all conscious, but no one was ready for a fight.
Kalino, Shade, and Alaxander spent the day doing some spear training, Julius carved a bone longsword, and Kiara rested. Everyone was pleased that there was no excitement.

In the morning, things were much the same as the day before. Kiara used her master's magic to heal the group and they spent the rest of the day relaxing and slowly depleting their stores of food and water. Some of the group were able to find water trapped in areas of the canyon and near the canyon opening.
It was a quiet day, with no unexpected visitors.

After the morning's healing, everyone was feeling much better. Although they still had bruises and small wounds from the battle, they did not fear dying if a group of tari found them. They decided to wait until Vashti emerged from her cocoon, before departing. They were worried that it would take a week, or more, but they were wrong.
That evening, as the sun was setting, Vashti's cocoon started shaking. Bulges appeared randomly across the surface of the cocoon and tears began to appear. The group discussed if they should help her, but Alaxander said that on his farm, back in Balic, if you helped a kitsu hatch from their egg there was a chance they could die. Everyone decided to wait. 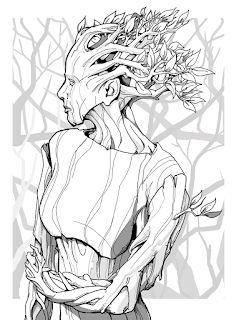 It took over an hour for a green arm to emerge from the cocoon of plant matter and another hour for Vashti to fully emerge. She was changed and clearly no longer human. Her body was made of various kinds of plant matter. Her hair was gone, replaced with thick stems and leaves. She was exhausted and thanked everyone for watching over her. Then, she fell into a deep sleep.
Everyone was relieved to have Vashti back and they did not include her in the watch rotation that night.

Vashti retained her magical connection the elemental lords of water and was able to preach her sermon and summon water. Her sermon was more virtuous and inspired.
They planned on moving out late in the morning and return to the site of the tari battle. However, as they were packing up their camp, a forty foot horned lizard crawled down from the top of the cliffs and rushed to attack Shade.
The fight was tough, with Shade being knocked out by the lizard. The lizard tried to flee with Shade's body, but the group was able to slay it. Healing magic was used and Shade regained consciousness.
Shade and Kalino skinned and dressed the giant lizard. They set out the meat to dry and Kalino used the last of his salt to preserve some of it as well. Scavengers picked off some of the meat, but the group did not care much. There was so much meat, they could not carry it all.
Julius finally finished his bone longsword that day. It was carved to perfection and Julius did not believe he'd ever made a better blade.