Most magic items have a bonus to hit and damage and it is permanent. One of the flavorful aspects of the Dark Sun setting is lack of resources. So, I wondered, what if magic weapons had charges? These are my thoughts and suggestions on how charged weapons could work in the AD&D second edition game, tailored toward the Dark Sun campaign setting.
The base rules for magic item creation are found in the Book of Artifacts. These rules should be used to supplement, and not replace, the rules found in this article. If there is any confusion or contradiction, just assume the Book of Artifacts is correct.
This system would require some bookkeeping, just as all magic items with charges do. If the PC is able to determine the number of charges than you, as the DM, may allow them to keep track of it themselves. However, if they do not know, you should not inform them and watch them stare in disbelief when their weapons ceases it's glow, or crumbles to dust.

A weapon with charges should be easier to craft, as opposed to a permanent magical weapon. The DM may allow them to be crafted at an earlier level, or with less impressive exotic ingredients. Magical weapons with charges can be limited-use or rechargeable, according to DM fiat and player desire. The difficulty of creating a magical weapon with charges should be lower than a permanent magical weapon.
When created, a chargeable magical weapon has 20 + 3d10 charges, but a found chargeable magical weapon usually has half of that amount. Once the charges have run out, the weapon may crumble to dust, or become a normal weapon of the appropriate type. Weapons may be recharged if the appropriate spells and casters are available.
Weapons created by a wizard are generally recharged with the 4th level wizard spell, Enchanted Weapon, along with any additional spells, if additional spell effects are included. Weapons created by an elemental priest are not often charged with a specific spell, but with elemental spell energy that drains a fourth level spell, along with any additional spell energy required by the DM. Elemental cleric and druid created magical weapons can only be recharged by priests of the same type as their creator. So, a weapon created by a fire cleric can only be recharged by a fire cleric.
Templar crafted items must be recharged by a templar of the same sorcerer monarch. A templar of Hamanu cannot recharge a weapon crafted by a templar of Nibenay.
An example weapon is detailed below: 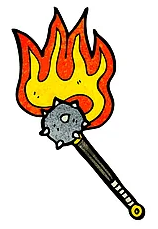 Chargeable +1 flaming footman's mace.
This mace was created by a fire cleric of great power. He used the mace to fight a horde of silt runners that attacked his village. Unfortunately, he passed away sometime later and the mace was stolen by some elves.
Magical properties: +1 mace of flame (Which causes 1d4 additional damage).
Charges when created: 36.
Charges when found: 18.
Every time the weapon strikes a target, the +1 bonus to attack and damage is automatically used and one charge is automatically expended. The user may activate the flaming aspect of the mace by speaking the command word, "Nar'Alan." The head of the mace then glows red and yellow, but erupts into flame when it strikes a target. This causes an additional 1d4 damage and uses an additional charge. So, one charge is automatically used for the +1 bonus and the PC can choose to expend an additional charge to cause an additional 1d4 damage.
The mace may be recharged by a fire cleric. The cleric would need to expend spell energy equal to a fourth level spell (removing a fourth level spell slot for the day) and energy equal to a second level spell (removing a second level spell slot for the day.) This would be in addition to the required preparation outlined in the Book of Artifacts for priest items.
Posted by Rajaat99 at 4:00 AM