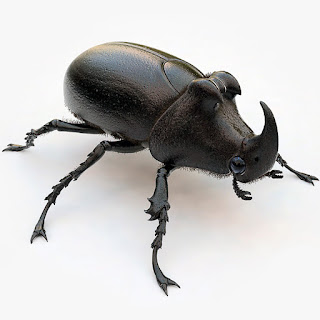 Braxat Beetle, Acidic
This monstrous beetle roams the Tablelands searching for food, crushing and melting anything in its path. The horn of an acidic giant braxat beetle extends about 4 feet. The horn being smaller than a standard braxat beetle is the only indication that this beetle is the more deadly variety.
Acidic braxat beetles are basically unintelligent and always hungry. They will feed on virtually any form of organic material, including other sorts of beetles. They taste matter with their antennae, or feelers; if a substance tasted is organic, the beetle grasps it with its mandibles, crushes it, and eats it. Because of the thorough grinding of the mandibles, nothing eaten by these beetles can be revived by anything short of a wish. Acidic braxat beetles do not hear or see well, and rely primarily on taste and feel.
Acidic braxat beetles may be found near other giant braxat beetles, but these beetles are competitors for food and not part of any family unit.

Combat
The mandibles of this giant beetle inflict 3d6 points of damage on anyone unfortunate enough to be caught by them; the tremendous horn is capable of causing 2d8 points of damage by itself. These attacks may be used in the same round.
The acidic braxat beetle is capable of firing a cone of acid at one target up to 40 feet away, or a line of acid up to 120 feet away. Shooting this acid requires the acidic braxat beetle to give up its physical attacks. The line or cone causes 5d4 points of damage, a saving throw vs breath weapon is allowed to reduce this damage by half. If the save vs breath weapon is failed, the target should immediately roll to save vs acid for their armor. If this save fails, their armor is destroyed. If piece mail rules are being used, roll a d8 to see which piece of armor is destroyed. 1= Right Arm, 2= Right Leg, 3-6=Breastplate, 7= Left Arm, 8=Left Leg.

Ecology
The shell of this desert dweller is commonly black or sandy brown. Like most beetles, pieces of the shell can be used to make armor, but braxat beetles are large enough for their shells to make barding as well. In addition, a wearer of braxat beetle armor gain a +1 saving throw bonus and a -1 armor class bonus vs acid attacks of any kind.
Acidic braxat beetles get a saving throw vs spells to resist psionic attempts at controlling them.