The Battle in Urik. A Dark Sun Fable. 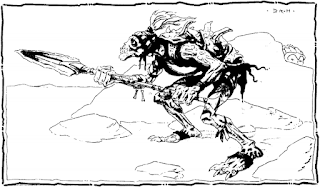 A young man from a small village south of Altaruk set out to explore the Tablelands. He returned a year later and told everyone of his great adventures and the wonderful things he had done.
One of the stories he told was about an army of gith that attacked the city-state of Urik. He told how he marched out in the front of the army and slew a dozen gith himself, with nothing but a stone tipped spear. He said he slew more than any other single man and the King heaped praise upon him. If anyone in the village ever traveled to Urik, they could find out it was true from the many witnesses.
Not long after he told this boastful tale, a dozen gith raiders were spotted approaching the village. The villagers laughed at the small force and did not prepare a proper defense. The boastful young man was given a stone tipped spear and made to stand between the village and the raiders.
As the villagers watched in anticipation of their champions victory, the man broke and ran, not having the bravery to face the gith. He died with a gith spear in his back.
The people of the village were captured and sold into slavery. Their village was destroyed, so they had nowhere to return to. The villagers cried out in anguish, but they all blamed themselves for believing such a fool.