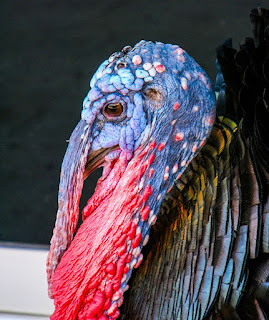 In honor of Thanksgiving, the United States holiday, I gave stats for the Athasian Turkey, which is mentioned in the Veiled Alliance sourcebook, two years ago. This year, I present the psionic version of the terrible beast.Happy Thanksgiving!

Psionic Summary
Level: 3
Dis/Sci/Dev: 2/2/7
Attack/Defense: EW, MT/ M-, MB
Score: 14
PSPs: 38
Psychometabolic: Shadow-form, Adrenalin Control, Cause Decay, Displacement, Flesh Armor
Psychoportation: Teleport, Time Shift
Psionic Turkey
Psionic turkeys are indistinguishable from other wild turkeys and will live in a flock of normal wild turkeys. Psionic turkeys can fly, but only in short bursts, being forced to land every 1d4 rounds. Psionic turkeys cannot be domesticated.
Psionic turkeys have excellent eyesight and reduce, by 5%, a character's chance of hiding in shadows and are only surprised on a roll of 1 or 2.
Combat
Unless protecting their flock, psionic turkeys will use shadow form and flee. If cornered, the psionic turkey will generally use psionics, before resorting to their beak, which inflicts 1d6 points of damage, or their leg spur, which inflicts only 1 point of damage. These spurs contain type C poison with an immediate onset time. The turkey cannot attack with both beak and spur in the same round.
Ideally, psionic turkeys will use their shadow form or time shift to sneak up on their attackers and attack from surprise. They will generally use displacement, flesh armor and adrenalin control in physical combat. When a psionic turkey uses adrenalin control, it is granted a +1 to hit and a +2 to damage.

Ecology
Turkeys developed psionics as a natural defense mechanism against the more vicious predators of Athas. Psionic turkeys provide the same amount of meat and feathers of other wild turkeys, but the meat has a more savory taste.
Like erdland, psionic turkeys enjoy eating esperweed and benefit immensely from eating it. They gain 5 levels of psionics (gaining new disciplines, sciences, and devotions). their power score increases to 17, and their PSPs triple.