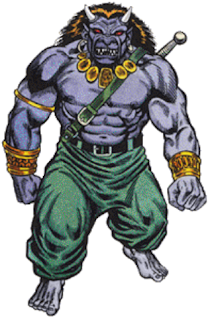 The b'rohg skeleton ran forward and punched at the efreeti, but the efreeti deftly dodged the attack. Kalino sent three bolts of magical energy that struck the genie. Alaxadner struck the efreeti with a blast of concussive mental force. Shade rushed to attack, but the efreeti turned into mist.
Julius started to gather the mist into an empty ceramic jar, but no one else knew what to do. Suddenly, the efreeti reappeared at the far end of the hallway. Everyone ran to attack it.
Kalino struck the efreeti and it vanished into nothingness. Julius said it might have been an illusion, because the mist was still present. The mist began to coalesce.
The efreeti appeared behind Shade and the mist vanished. The efreeti punched Shade twice, once on the shoulder and the second strike to his hip, right in his belt pouch. Shade fell to the ground.
Nearly everyone immediately jumped into action and attacked with everything they had. Kiara ran to Shade and healed him. The efreeti had run out of tricks and the party was able to overwhelm him. Julius struck the killing blow.
The efreeti's lifeless body fell to the ground and erupted into flames. The flames burned away quickly and his body was gone.
Keraptis' voice spoke from around them. "That was the most entertained I've been for years."
Vashti called Keraptis a coward and told him to come out of hiding and face them.
Keraptis laughed, "I have no reason to fight you. You may go, or stay as you please. Perhaps you will return and entertain me in the future."
The group murmured and Alaxander opened a large dimensional doorway with the way, which took the group to the guarded lands of the druid Abbas, near the ruins of Kalidnay. Abbas welcomed them and assisted Kiara and Vashti in healing the group. Abbas wanted them to stay, or at least Vashti to stay, but they said they had a mission to complete and could not. Abbas understood. 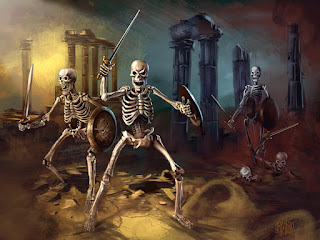 Alaxander used the way to carry them to the ruins of Nibenay, outside of the giant talking inix's pyramid. However, it was evening and the pyramid was surrounded by undead. Before the undead could attack him, Alaxander scrambled back through the doorway and closed it. Panting with fear, Alaxander told the group that the undead seemed to be laying siege to the pyramid.
The group talked it over and decided to have Alaxander open a doorway into the interior of the pyramid. He would have to open it on the top floor, since that was the only place Alaxander had been. The group agreed and bid Abbas farewell again.
The top floor of the pyramid was a flurry of activity. The tari were surprised by the groups arrival and pointed bone and stone tipped spears at them. Once the tari saw it was the group, they relaxed and went to reinforce the pyramid's doors. The group assisted as much as they could.
One of the tari signaled for Vashti to follow him. She took the stone, the amulet, and the egg. She then followed the tari into the bottom level of the large stepped pyramid.
The talking inix was speaking with some of the tari and had some crude maps of the ruins in front of him. Vashti waited patiently until the inix was ready to speak with her. She did not wait long.
The inix was extremely pleased with the group's retrieval of the amulet, stone, and, most importantly, the egg. He gladly handed over the green gemstone, which wanted to leave immediately. The gemstone introduced itself as the Lord of the Legs. The inix let Vashti use the pearly white stone, which magically rotated around her head and healed her wounds. He took the stone back and then lead her to the top of the pyramid.
In the top of the pyramid, he explained to the group that he would reward them with other treasures, if they assisted him in fighting the undead horde. The group declined and told the inix they had pressing matters to attend to elsewhere. The inix was saddened, but understood.
Alaxander used the way to open a doorway to the trade fort of Altaruk. They stepped through and arrived just outside of the fort. Kalino said he would speak to the guard and he did so. The group witnessed him pass some ceramic pieces to the guard and the guard whispered to seek a woman in the inn. The group didn't ask Kalino about it and were eager to get inside and sleep in an actual bed. 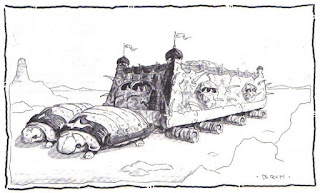 In the morning, the group listens to Vashti's sermon and she healed their wounds. Kalino told them that he discovered that they were wanted in Tyr. He suggested that if they returned there, they should disguise themselves. Everyone agreed.
Shade inspected the many gems that they had gathered inside Keraptis' liar. The efreeti had punched the gems and many of them were cracked. The group groaned for a moment, but realized that they still had a fortune.
The group happily purchased iron weapons for themselves, purchased a new pack kank, and plenty of supplies. Even the normally tight-fisted Julius purchased an iron bastard sword. In addition, everyone, except Julius, replaced their heavily damaged wardrobes.
Kalino had noticed that an armored fortress wagon was parked outside of the fort and it was very likely that they had slaves. He suggested that they follow it away the fort and attack it to free the slaves.