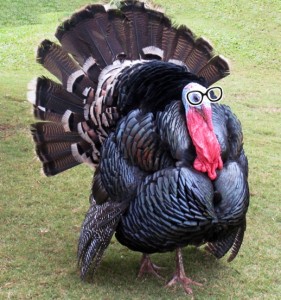 In honor of Thanksgiving, the United States holiday, I gave stats for the Athasian Turkey, which is mentioned in the Veiled Alliance sourcebook. This year, I present the intelligent version of the terrible beast.
Happy Thanksgiving!

Combat
Intelligent turkeys uses their vicious serrated beak that inflicts 1d6 points of damage and a wicked spur on the back of its legs that inflicts only 1 point of damage. These spurs contain type C poison with an immediate onset time. The turkey cannot attack with both beak and spur in the same round, so it usually attacks with whatever is more practical.
Intelligent turkeys have been known to attach wrist razors to their legs, or throw javelins, from the safety of a ledge or tree.

Ecology
Turkey meat is white and mild tasting. It is desirable by the upper-classes because it easily takes on the flavor of the spices it's cooked with. An intelligent turkey provides six pounds of meat and one-half pound of marketable feathers, the same as a wild turkey.