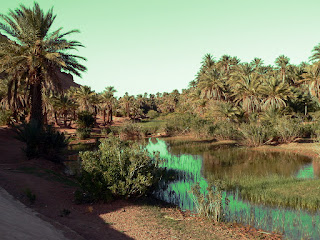 The group awoke in the grassy area of the Lost Oasis. The group was badly injured and took the time to recover. They laid about lazily for the entire day.

In the morning, the group decided to return to the volcano and find the gem they needed. They took their new druid ally with them, Dimitria. Alaxander use the way to open a gateway, so they could return to the volcano complex. Once inside, they got attacked by a group of firenewts and lesser magma paraelementals. The group quickly defeated them.
A dozen firenewts, along with their pet frilled flame lizards, were waiting for the group, deeper into the complex. The group rushed into the battle and scattered their foes. The firenewts that weren't killed, fled away from the battle. A firenewt, who was trained in the way, attacked Alaxander's mind, but the group rushed him and he fled. 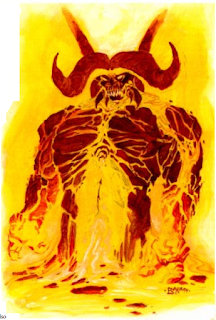 The group slowly, and as quietly as possible, returned to the largest room. It was empty, except for a large pit of liquid hot magma. Raco, Kiara, and Kalino jumped over the pit and started making their way to the doorway, on the opposite side of the room. They could see the doorway was half filled with cooled igneous rock.
Suddenly, the pool of magma rippled and out of it rose the huge, bipedal magma beast. Raco quickly used the way to turn himself into a much smaller version of the magma beast, but it did not fool the huge creature. The beast hit Raco with its tail and burned Alaxander with a touch from its burning hands. Kalino and Kiara struck out at the monster's legs, but their iron weapons melted against the monster's molten skin. Lilith tried attacking its mind, but to no avail. Nyla attempted to use the way, but failed.
Raco leapt on the creatures back and started pummeling it, with his fists. Kalino drew energy from the scant plant life in the area and fired some bolts of magical energy. Kiara called upon her master and increased the groups combat ability. Nyla threw a wooden javelin, but it burst into flames, as it struck the beast.
The magma beast slammed it's back, and Raco, against the wall, hoping to dislodge him. It hurt Raco, but he held on. Then, it opened it's mouth and spit out a wave of burning lava. The lava coated Alaxander, Nyla, Shade, and Shade's pet jhakar. Alexander feared the worst, so he came up with a plan. He would use the way, to transport a great deal of water onto the beast. The water would cool, and hopefully, harm the creature. However, Alaxander only knew about one large body of water, The Black Water of Yaramuke.
A large dimensional gateway opened above the magma monster. Thousands of gallons of cool, tepid water cascaded down upon the creature, Raco, Kiara, and Kalino. Kalino and Kiara were slammed to the stone ground, by the force of the water. When the water hit the creature, and Raco, they were both immediately cooled and the water was instantly evaporated. The result was a fantastic explosion, which threw Raco off of the monster. 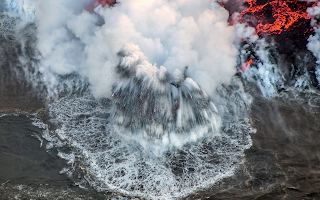 The shock of the cooling effect reverted Raco into his natural form and he fell unconscious. Pieces of the creature, now pumice, shot through the room like arrows, seriously harming everyone. A second later, the water reached the open pit of magma and caused another explosion. In addition, the room was filled with burning steam.
The gateway closed, as Alaxander fell unconscious, and the water stopped flowing into the room. The water then flowed through the open doorway, which lead to another room with an open magma pit. There was another explosion, which did not strike the party, but filled the room with more burning steam. The entire group was on the ground.
Dimitria was the only member of the group who was awake. Through the burning steam, she saw Raco, face down in a puddle. Bubbles were coming from his mouth and nose and his blood was coloring the puddle red. In an impressive feat of strength, she dragged Raco out of the room and into the hallway that was half filled with pumice.
The steam was not filling this hallway completely, as the entrance had a lot of pumice, but the pumice reduced further down. The steam naturally rose, leaving the area near the ground free from it.
She quickly stabilized Raco and used her magic to heal herself. She then ran back into the room to look for survivors. She checked everyone, even Shade's pet jhakar, but they were all dead.
She crawled back into the pumice filled hallway and wept.
Join us in two weeks for another exciting session of Adventures Under the Dark Sun.
2nd edition AD&D Dark Sun Cast of Player Characters
Alaxander: Human male psychokinetic. 18 years old. Played by Ben. Speaks Balican, Tyrian, Giant, and Elf.
Nyla: Dwarf female psychometabolist/fighter. 50 years old. Played by my wife. Speaks Dwarf, Tyrian, and Urikite.
Shade: Half-Elf male ranger/thief, 18 years old. Played by Chad. Speaks Balican, Elf and Tyrian.
Kalino: Human male fighter/preserver. 20 years old. NPC. Speaks Rammin, Tyrian, and Balican.
Kiara: Human female fighter/templar, 22 years old. NPC. Speaks Balican and Tyrian.
Dimitria: Human female druid. 20 years old. Played by Mary. Speaks Urikite, Raamin, and Tyrian.
Raco: Mul male psychometbolist. 20 years old. Played by Dave. Speaks Dwarf and Tyrian.
R.I.P. Alaxander, Kalino, Nyla, Shade, Kiara, and Shade's Jhakar.
Posted by Rajaat99 at 4:00 AM