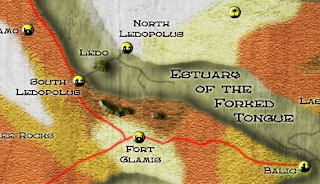 Dwarves seem to be some of the very best builders in the Tablelands. Perhaps this is due to their focuses, or their long lives. I may not know why, but I know Dwarves build very sturdy structures that are beautiful in their simplicity.
Most Dwarves live alongside the other races in the various city states and tribal villages, but a Dwarf's focus may lead them anywhere in the Tablelands.
Although I know a great deal about the twin villages of North and South Ledopolous, due to the time I have spent there, I would rather have my friend and trading partner, Menodora, give more information about them. Menodora was born in South Ledopolous and spent much of her youth traveling between the two towns.

Ledopolous was founded a hundred years ago by a group of Dwarven merchants from Balic. This was the village that would become South Ledopolous. The Dwarves wanted to build a faster route from Balic to Gulg and Nibenay. They decided that merchant houses and dune traders would pay for the ease of access. The giants that lived on Ledo, however, saw the Dwarves as invaders. The Dwarves tried to explain their plan and even promised to share their wealth with the giants, but the giants believed that the Dwarves were going to steal their flint deposits. Dumb brutes. So, the giants attacked us and have been attacking us ever sense.

North Ledopolous was founded shortly afterward, when the Dwarves figured out their giant problem wasn't going away any time soon. They decided that if they built two bridges at the same time, the giants would have a harder time doing enough damage to stop construction completely. The giants saw this as an even greater incursion into their territory and stepped up their attacks. To this day, the giants of Ledo will not listen to us and attack any Dwarf on site.
Currently, we use silt skimmers to cross the Estuary of the Forked Tongue. Merchants pay us based upon their cargo and passenger needs. The trip can save five or six days of travel to Gulg and Nibenay. That's five or six days of food and water expenses gone, not to mention getting your goods to market first can get you the best price.
In addition, South Ledopolous has some copper mines in the mountains southeast of the city. These mines are heavily guarded and are rigged to collapse if an enemy force overtakes them. Much of the copper is traded for food and water from Balic and Nibenay.
So, now that you know about the history and purpose of the villages, let me tell you about how the city is laid out. For obvious reasons, North and South Ledopolous are both surrounded by thirty foot tall tapered walls. The walls are made of stone local to South Ledopolous and shipped to North Ledopolous, because North Ledopolous is on a Salt Flat. The stones are quarried as large as possible to be able to withstand the attacks from the giants.

South Ledopolous has a population of two-thousand. Founded as a Dwarf village, Dwarves still make up the vast majority of its residents. If I had to guess, it's be at least seventy percent Dwarf, probably more. Humans are the second most populace and most of them work for the trading houses who keep their warehouses here. Elves come and go enough to have a small market here and there. There are some Mul and Half-Giant slaves who help construct the bridge or mine copper. There is a little agriculture around the village, but not enough to support the population.
Buildings in South Ledopolous are laid out in a very precise grid. Most of the buildings are only a single story high, made with stone walls and hide roofs. Before building or expanding, permission is required from the Uhrnius of building management. Currently Taine Galatas holds the position. He is stern and has exacting standards for buildings construed inside and outside of the wall.
The main road runs a half-mile and forms a straight line from the main gates to the gates that lead out to the bridge, splitting South Ledopolous in two. The main road is lined with businesses, beginning with local Dwarf businesses near the main gate and the merchant house warehouses near the bridge gate. Elves usually set up their tents outside the main gate, or between legal businesses. When the guards arrive to evict the Elves from the areas between buildings, they gracefully apologize and move, only to set up shop a short while later two streets away. 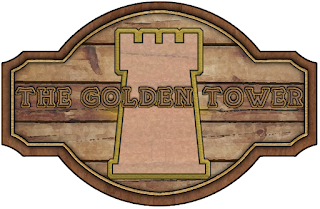 There are a few taverns and inns that provide rest and refreshment to travelers. It is important to let you know that there are no taverns that are also inns in South Ledopolous. This would be against the law that was laid out by the village founders and Taine Galatas strictly enforces.
Taverns that cater to locals are usually located in one of the districts away from the main road, while taverns that cater to travelers are located on or near the main road. If anyone cares, I might suggest The Golden Tower. A tavern that most certainly caters to travelers, they have good ale at reasonable prices. They also have some good erdlu steaks that the owner, my cousin Drita, says is a secret family recipe.
Creatively, the districts in South Ledopolous are the North, East, South, and West districts officially. Unofficially, the North district is known as the Bridge district, because that is where the bridge builders generally live and it tends to be pretty desolate during the day. There are also stone cutters that work to shape the bridge stones that can be heard working throughtout the day. The East district is the Miner's district, because most of the mine workers live there. It too is emptied during the day, for the most part. Tool workers live here also, as well as livestock keepers. The South district is called the Pilgrim district, because it caters to the travelers that pass through the village. This is the district where most of the taverns and inns are located. Finally the West district is jokingly called the Noble's district. There are no nobles in either Ledopolous, but most of the old Dwarf families live here and this is where most of the villages business gets done.
The village government is simple. A Uhrnomus leads the village with a council of Uhrnius' to aid him or her. The Uhrnius' in turn have a group of Uhrakkus' to aid them. It's quite efficient in practice and we've never had any major problems. The current Uhrnomus is Mahzun Pachis, a powerful master of the Way. Like most Uhrnomus' in the past, Mahzun is strict and exacting in his interpretation of the law. Most Dwarves like him and believe he is fair and just. There are many Uhrnius for each aspect of city function, like building management, mining operations, bridge construction, and so on.
Although kept in small numbers compared to the city-states, slaves are present here. To prevent rebellion, slaves are treated well. As long as they work, they are provided food, water, and shelter. It may seem odd to city-state dwellers, but most of the slaves here are allowed to freely walk the streets. They must wear necklaces of giant hair and bone that denote their slave status, to prevent them from leaving the village, and removing one is illegal. Physical punishment of slaves in South Ledopolous is looked down on. The most common slave punishment is to simply trade them to a merchant house that will treat them much worse. In turn, the new slave will tell the Ledopolous slaves how good they have it. It's worked well so far.
South Ledopolous strives to be an example for civilized Dwarves everywhere. Law and order are very important, as well as general civilized behavior. It is believed that this adherence to order is the best was to make sure the work gets done. 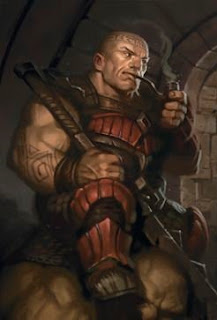 North Ledopolous is about half the size of South Ledopolous in both population and geographic size. There is no agriculture and no water source, so all food and water must be imported. There is some salt mining that is done for trade, but most of the salt deposits are not suitable quality for consumption. Most of the business of North Ledopolous is to construct the bridge, that will one day span the Forked Tongue Estuary, and fight giants.
Dwarves are up to ninety percent of the population in North Ledopolous. The humans here generally work for the merchant houses and Elves rarely visit. Any Mul here would likely be a slave, purchased to work on the bridge.
Like South Ledopolous, North Ledopolous has a Uhrnomus and councils of Uhrnius and Uhrakkus. However, unlike South Ledopolous, North Ledopolous' leaders are less than exact when enforcing the law. The current Uhrnomus is Wessel Raptis, a psychporter of respectable ability. Wessel believes that problems are best solved by the participants, so he avoids taking proactive action. Some might call Wessel lazy, but I believe that would be mistaken. I have seen him help construct the bridge and he works as hard as anyone. I'm just not sure how interested he is in administrating his village.
North Ledopolous has a main road that runs from the bridge gate to a main gate. The main gate of North Ledopolous opens onto the Great Ivory Plane, which travelers find easy and fast to travel across. The village does not have districts and the population is spread throughout the village. Streets are mostly laid out in a straight line and all buildings are a single story tall.
While there are many taverns, there is only one inn in North Ledopolous, the Wayfarer's Inn. It is also a tavern and is of moderate quality. They keep prices low enough to encourage merchant's to stay there, instead of their small cramped warehouses. Traveler's can stay on the hard baked salt outside, or a raised bed of hemp canvas and treated erdlu hide at the inn.
Slaves are a larger portion of the population, but are still uncommon compared to the city states. Slaves have slightly more freedom in North Ledopolous than South Ledopolous, because fleeing into the Great Ivory Plane is a death sentence. Slaves are treated the way a craftsman would treat a valuable tool, useful and well taken care of, as long as it is working.
North Ledopolous is more of a frontier town than it's more civilized twin. Don't be surprised by tavern fights that spill out into the streets, or to see ladies of the night looking for a companion to help keep their bed warm. As long as the work gets done, no one seems to mind.