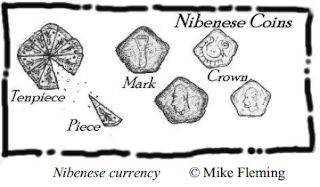 Introduction
The adventure starts by explaining that it is for a group of third level player characters and gives some character suggestions. It also explains that it may take place in any city-state with a living sorcerer monarch and involves intrigue and politics. I found these suggestions good, but I don't actually believe the city-state much have a living sorcerer monarch. Templars simply need to still have temporal power for this short adventure to work. So, Tyr after the death of Kalak would work, but Balic probably wouldn't.
The next part of the introduction explains the background of the adventure and the ideal adventure path. It then explains the minor changes that would have to be made based upon which city-state it was set and gives a brief synopsis of the main NPCs. This section is nearly perfect, except Heinig wrote Forest Ridge when talking about Gulg, when he meant Crescent Forest. Oops.
The last parts of the introduction discuss the villain's scheme and how he/she are pulling it off. It also talks about how to run the adventure for dungeon masters who are used to dungeon crawls. There are a lot of good suggestions, like not attacking the main villain right away. It also offers a method for variable treasure, which is good for skin flint dungeon masters like me.
Part one begins with the PCs getting arrested. There is some good boxed text that does not force the characters into doing anything that the player may protest. The rest of it is outlining the villain's plan for the group. It is well written and easily understood. This is the most likely point where players can derail the adventure by attacking the villains, so dungeon masters and players will have to be start about it. If one character is particularly blood thirsty, perhaps that character should not be present when the arrest is made. 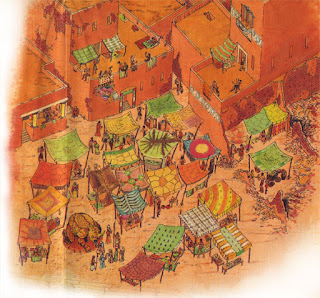 Part Two is all about the first job the villain needs the players to accomplish on his/her behalf. It seems to be a simple shakedown, but also gives advice for how to handle the player character's actions based on their alignment. The adventure encourages the players to do the job, but ask questions about the villain also. If the player characters don't normally interact with NPCs, then the dungeon master may have to hold their hand to get information. If you have players who really like to roleplay, then this should be right up their alley.
Part Three is another task, a breaking and entering job. Tactical players will enjoy attempting to overcome the challenges and get the job done. Combat heavy characters may want to wait outside, as they is not much for them to do. However, the characters would be smart if they have their social character talk to the noble and explain what is going on. They can gather valuable information. The adventure suggests a reaction check to determine the noble's initial reaction. I would encourage the DM to offer modifiers based on how the characters are dressed, if they are armed, if they are clean, etc. Nobles are far more likely to listen to a clean well dressed traveler, than a filthy brute who is armed to the teeth. Also, this job may have to be altered in the adventure is taking place in Gulg, where everything is owned by the Oba.
Part Four is Templar's final task. The Templar is meeting some Elves to get some contraband and wants the characters to serve as bodyguards and hit men. This part should please the characters who have been itching for a fight. The characters are introduced to a new character in this part also, Branak, who is instrumental in taking care of the main villain. It is not mentioned in the adventure, but I would have the main villain and Branak be shown not getting along, or at least that Branak is the Templar's unwilling assistant in some way. Otherwise, the players might kill Branak, which would be problematic. There is also a suggestion on how to make things more difficult for higher-level characters, which I appreciate.
Parts Five and Six provides information that the characters can gather and offer suggestions on how to handle characters that go off the rails. There are also suggestions on how to handle things after the adventure is completed and how to add a couple of extra encounters to stimulate the combat characters. It is wrapped up with maps, pregenerated characters, and NPC game statistics.
Jesse Heinig did a fantastic job and obviously worked hard to provide all of us Dark Sun fans with a great short adventure that can easily lead to more adventures. I encourage everyone who is a fan of Dark Sun to download and read "Bad Bits." I look forward to Jesse Heinig's next project.
May you always find water and shade.