Excerpt from the Wander's Journal 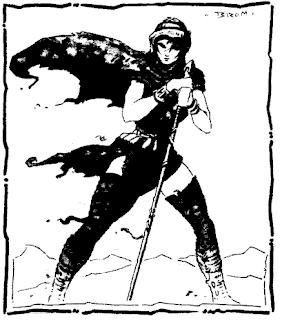 I have been pulling a lot of overtime at work, so I have been unable to do a lot of writing for my blog lately. However, I want to share something, so I have taken an excerpt from The Wanderer's Journal, from the original Dark Sun boxed set.
Sometimes I get so caught up with the extensive lore and history that I forget what Dark Sun is really about. It's about survival against the brutality of Athas. Everyday that your character survives is a success.

"I live in a world of fire and sand. The crimson sun scorches the life from anything that crawls or flies, and storms of sand scour the foliage from the barren ground. Lightning strikes from the cloudless sky, and peals of thunder roll unexplained across the vast tablelands. Even the wind, dry and searing as a kiln, can kill a man with thirst.
This is a land of blood and dust, where tribes of feral elves sweep out of the salt plains to plunder lonely caravans, mysterious singing winds call men to slow suffocation in a Sea of Silt, and legions of slaves clash over a few bushels of moldering grain. The dragon despoils entire cities, while selfish kings squander their armies raising gaudy palaces and garish tombs.
This is my home, Athas. It is an arid and bleak place, a wasteland with a handful of austere cities clinging precariously to a few scattered oases. It is a brutal and savage land, beset by political strife and monstrous abominations, where life is grim and short." - The Wanderer

Email ThisBlogThis!Share to TwitterShare to FacebookShare to Pinterest
Labels: TSR