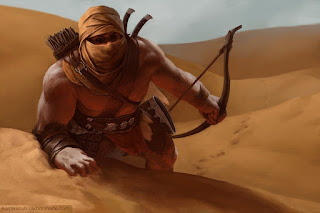 After Julius slew the cleric, Abilkisu attacked the bowman, who was shooting obsidian tipped arrows at his mistress. He struck him with his stone mace and the archer fell back.
Shade picked up his fallen iron dagger and stabbed one of the spearmen attacking him. He also used his bone alhulak to slash him. Kiara followed Shade, using her obsidian wrist razors to lethal effect. The guard fell, his blood providing moisture to the dry ground below.

Alaxander was still surrounded and one of the guards managed to cut him. Mohamed also managed to cut Alaxander with his copper kukri. Seeing himself in a bad situation, Alaxander used the way to teleport one hundred feet away, near Julius.
The wind was picking up, sand and dust were blowing wildly, reducing the effectiveness of missile weapons. Vashti and Kalino were attacking an archer. Julius used the way to detonate the ground where Alaxander once stood. Shade and Kiara continued to fight as a team, attacking another spearman near them. The spearman stabbed Shade and then fell back.
The slavers that were attacking Alaxander turned their attention to Shade and Kiara, they quickly surrounded them and knocked Shade unconscious. The archers, who were shooting at Abilkisu and Vashti, were having difficulties hitting their targets due to the wind. The cleric used a sling to hit Vashti. Kalino was grazed by one of the crodlu riders.
Kalino slashed the crodlu rider again and he fell. The riderless crodlu started running wildly around the battlefield. Murad, Yonas, and Aden ran past Kalino, toward the slave wagons.
Alaxander used the way to strike one of the archers with mental force. Vashti used her water hammer to strike at another archer and Abilkisu ran up to engage him with his stone mace. Julius was mentally drained, so he stepped forward to attack one of the slavers with his bone longsword. Before she could be surrounded, Kiara grabbed Shade by his tunic and dragged him away from his attackers.

Mohamed used the will to move very fast and strike with blinding speed at Kiara. His slaver minions ran after her too and jabbed at her with their spears. Some of the archers moved closer to Vashti, and Abilkisu, and kept firing at them. The lone crodlu rider stabbed Kalino with his spear. Three of the slavers attacked Julius, but only managed to graze him.
Kalino grabbed the crodlu rider and cut him deeply on the thigh. Aden moved away from Yonas and Murad to attack the slaver cleric with his bone dagger. The cleric easily dodged the clumsy attack. Yonas and Muard ran to one of the slave wagons and began cutting the rope that secured the door.
Alaxander used the way again to strike the same archer and the archer fell from his wagon perch. Vashti and Abilkisu were occupied with four archers shooting at them. They would rush to attack and the archers would fall back a few yards and shoot their bows at close range. Julius had his own worries, with three opponents to deal with. He slashed wildly with his bone longsword. Kiara was busy trying to slash Mohamed with her obsidian wrist razors, but he was moving too fast.
Mohamed cut deep into Kiara's arm with his copper kukri and then slashed her across the stomach with his bone hand axe. His underlings were taking the opportunity to jab at Kiara with their spears. Julius was shallowly cut by one of his opponents. Vashti and Abilkisu were getting annoyed at the shower of arrows coming from the nearby archers. Kalino was wounded again by the crodlu rider. The cleric looked at Aden with a look of disgust and struck the half-elf boy with his quarterstaff. The blow hit Aden in the face and broke his nose. Aden fell to the ground.
Kalino attacked the crodlu rider and seriously wounded him. Blood gushed from a thigh wound. Yonas and Murad continued to cut through the thick giant-hair rope, even though they were under fire from some nearby archers. They were nearly halfway through the tough rope.
Alexander used the way to hit one the archers that was peppering Vashti with arrows. Vashti ran to magically heal Aden, while Abilkisu struck at the cleric with his stone mace. Julius badly wounded one of the men attacking him, but the slaver still felt he had the advantage. Kiara managed to time Mohamed's movements and caught him in the face with her wrist razors, nearly removing his right eye.
Mohamed slowed down, his will exhausted. He tenderly felt at the deep wound on his face and was furious. His minions covered his retreat and stabbed at Kiara. They managed to wound her further. Julius blocked the jabs coming toward him. An archer focused on Yonas and fired an arrow into his shoulder. The cleric slammed his quarterstaff into Vashti's face and broke her nose as well. Vashti's eyes watered heavily, as the cleric insulted her element. A group of archers moved toward Abilkisu and kept shooting arrows at him. The wind was advantageous for Abilkisu, as many of the arrows either missed, or only grazed him. The lone crodlu rider, who was badly wounded, broke off from Kalino and ran away.
Kalino screamed like a maniac and charged toward the group attacking Kiara. Murad and Yonas managed to slice through the giant hair rope and open the slave wagon. Murad encouraged the slaves to grab weapons and fight. Aden rose, thanks to Vashti's healing, and stabbed the cleric in the back, killing him.
Alaxander saw Mohamed stumble back and used the way to mentally punch the wounded man. Mohamed flew back and fell to the ground. He did not rise again. Vashti turned her attention back to the nearby archers and attacked, both with her borrowed club and water hammer. Abilkisu joined her and hit the archer with his mace. Julius struck down one of his attackers, driving his sword through his gut. Kiara dug her claws into one of the slaver's arms, causing him to drop his weapon.
With a host of potentially new foes to fight, as some of the slaves were now free, and their leader dead, the slaver's moral dissolved and they fled into the darkness. The group was happy to let them go and did not give chase.
Vashti quickly healed Shade, who regained consciousness. The rest of the group opened the remaining slave wagons. They were quick to inform the slaves that they were now free and encouraged them to gather the weapons from the fallen slavers.
Most of the slaver's provisions became the property of the slaves. Kalino used the food available to make a large pot of erdu and potato soup. The slaves ate hungrily. Afterward, they all prepared to sleep and watch rotations were organized by Shade. The group suggested the former slaves choose a leader and they chose Murad.
In the morning, Kalino cooked a large meal again. Vashti preached her sermon and created water. Some of the former slaves cheered when the water poured from her hands. Murad then told them that the former slaves would be traveling to Raam, as many of them would be wanted men in Urik.
The crodlu was claimed by Alaxander, as no one else wanted to water the large beast. The groups packed up and said their goodbyes. The groups moved onto the road, one moving west and the other east.
The wind became worse and worse, with sand and dust blowing harder as the day went on. Shade warned them that a storm was coming and that they should seek shelter. The group broke from the road and began searching nearby, but the blowing sand and dust was making it difficult.
Shade finally found an old mekillot shell, that had been hallowed out and cleaned by scavengers. The group took their animals inside and prepared themselves to wait out the sandstorm. They drank some water and ate their meager lunch. 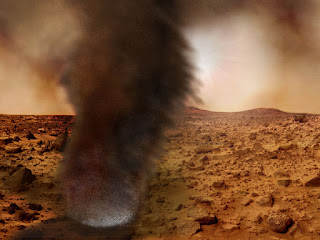 Lightning struck nearby and the wind was blowing from multiple directions. Shade was not surprised when the sand started to move into a funnel and a sand column formed Sand columns were vicious and brought destruction to everything in their path. Shade called out to secure their belongings as the column moved toward their camp. Shade prayed to the elements, pleading that their shelter would hold.
The sand column threw rocks and small boulders at incredible speeds. They debris slammed into the old mekillot shell. Large cracks appeared and pieces of the shell were ripped away by the wind. Shade knew their shelter would not hold and called out for the group to flee. As they did, the shell broke apart and was carried away by the wind.
The group was pummeled by rocks, causing serious injury to all of them and their animals. Miraculously, Kiara spotted a very large hole in the ground and encouraged the group to follow her. They did so and fled into the hole, to escape the fury of the storm.
Julius looked around, as the rest of the group was checking to make sure nothing, and no one, was missing. Twenty feet away, deeper below ground, he saw a large ten foot long creature. The creature had the body and head of a spider, but the claws and tail of a scorpion. Julius did not know what it was exactly, but he knew it couldn't be good.
Julius yelled out, "Back outside! Go back outside!"

Join us in two weeks for another exciting episode of Adventures Under the Dark Sun.