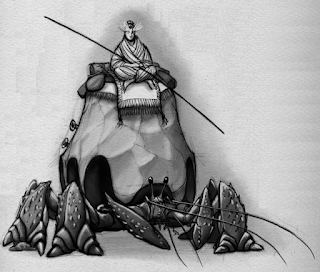 It was pointed out to me by Rovewin of Athas.org, that the k’cin crawler is mentioned in the Revised Dark Sun Boxed Set. However, they are not drawn up in that, or any other book. So, in an effort to rectify the situation, I have created the k’cin crawler below.


K’cin Crawler
The k'cin crawler is an eight foot tall and eight foot long, eight-limbed anthropod used as a beast of burden outside of the Tablelands.

Combat
K'cin crawlers would much rather run than fight, but if pressed into combat, will claw and bite for 1d2 damage per claw and 1d4 for a bite. If reduced to a quarter of their hit points, the k'cin crawler will pull into its shell, improving it's armor class by four, but reducing its number of attacks to only one claw attack per round. 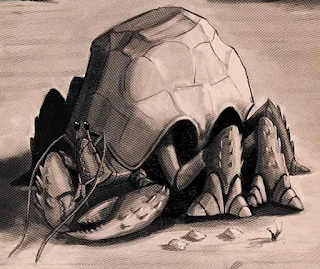 Ecology
K'cin crawlers form an important part of the athasian food chain. They prefer to eat carrion and other easily accessable food sources. The shell of the k'cin crawler is rock-like and cannot be worked into any usable object. However, certain settlements use the large and huge shells of dead adult and old k'cin crawlers as shelters. K'cin do provide a buttery and nutty flavored meat equal to it's hit dice multiplied by ten. Each pound of k'cin crawler meat sells for 2 bits per pound.