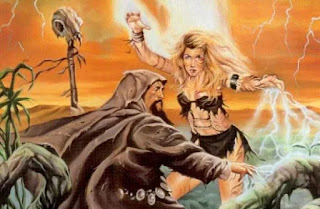 Vashti used the last of her healing magic to get everyone on their feet. They staggered, but were happy to be alive. Kiara told the group that she needed rest. Everyone agreed.
As they traveled back to the ground level of the palace, Vashti asked Kalino if he were some sort of templar. Kalino decided to come clean. He explained that he was a preserver, a wizard that used magic without killing plants. The group listened as he explained the process.
Vashti asked why he kept his abilities secret. Kiara answered that it's because preservers can still defile, but Kalino quickly added that a true preserver would not. The group seemed to understand.
They rested on the ground level of the palace, after a merciless day. They kept watch, with Julius taking the first watch.

Jessel arrived using a dimension door, just as everyone else was rising. His clothes looked a little charred and he complained about magma clerics. Everyone was happy to see him and told him the story of the queen.
Jessel assisted with some magical healing, Kiara, and Vashti did the same. With so many magical healers in the group, everyone was fully healed. They were feeling much better than the day before and hoped for continued good fortune.
They went outside and found no trace of Abu, or his minions. They retrieved their kanks and found that most of their water had been drunk and much of their food eaten, but Abu was true to his word and left the kanks. They refilled their water from the well inside the earth temple and noticed that the water level had receded. Vashti and Jessel came to the conclusion that if they stayed too long, the well would eventually run dry.
They returned to the palace and went into the sub-basement cave. Vashti inspected the water and found that a part of it seemed less black and more gray. She used her magic to speak with the water. The water told her that it felt like water again.
Vashti then used her magic to purify a section of the water. It became pure, but slowly mixed with the black water to become gray. She explained to the group what she had discovered. She believed the black waters would eventually become clean.
With his knowledge of the natural world, Shade estimated that it could take a few decades to fully clean itself, but magic could be used to speed up the process. The group briefly spoke of establishing a permanent base of operations near the ruins of Yaramuke, in a couple of decades. They also entertained the idea of informing House Wavir of the eventual cleansing of the oasis.
Having plenty of time to make up their mind, the group decided that other considerations had to take priority. Alaxander introduced them to the gem, who had agreed to be called the Lord of Arms. Everyone laid a finger upon it and it was able to speak into their minds.
It told them what it could do and told them that it was one of seven. Its tone made it clear that it believed itself to be superior to common humanoids. The group was annoyed, but knew that they needed it. It said that it could sense another gem to the west. They group decided to let Shade keep the gem, as the enhanced strength it provided would benefit him the most. Lord of Arms thought Shade was crude and uncivilized, but agreed to assist him.
As the group was leaving the ruin, Jessel looked up and shook his head. "The base of the mountain is in pain and I must assist. I am sorry, but I must leave you again." Everyone bid him farewell and he opened a dimension door and stepped through. Kalino made a joke that the "base of the mountain being in pain," meant that an elemental lord needed his bunions rubbed. Everyone laughed and the group marched on.
Now that they knew a little bit more about the layout of the former city, the group could see where the outer wall used to be. It was a ruined heap of rocks and sand, which the group trudged over. Just as they passed the outer wall, Julius' and Alaxander's packs began to shake violently. Alaxander looked into his pack and saw the eye was moving itself. Julius looked and the orb was doing the same.
Alaxander ran back across the wall and into the ruined city. The orb did not stop moving. It cracked suddenly and broke open. From inside the shard of the orb crawled an eye with an orange iris, supported by four spider-like legs. It looked up at Alaxander and he turned his pack upside down. 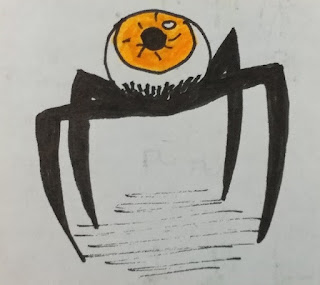 The eye and all of Alaxander's belongings spilled onto the sand. The eye looked at Alaxander again and began scuttling toward him. Julius looked in his makeshift pack and saw the remains of the blue orb, with a four-legged eye looking at him. This eye had a blue iris. Julius closed his pack.
Alaxander held still as the orange eye climbed onto his boot. It then slowly climbed up Alaxander's pant leg and up his torso. It eventually ended up on his shoulder and looked at him. The eye could not blink, because it had no lid, so it stared unceasingly at him.
Julius used the way to to mentally contact the orange eye. He found himself on the mindscape, it appeared as a vast cavern of seemingly impossible size. Stalagmites and stalactites were exceedingly prevalent. The eye was huge and floated above the ground.
Julius asked what it was. The eye answered that it was the Eye of Earth. Julius then asked what its goal was. It stated that its goal was to protect and restore the earth on Athas. Julius asked if it meant them any harm, to which it replied that it would only harm them if they harmed the earth. Julius could sense that it was not lying and he exited the mindscape.
He told the group about the mental communication, while releasing the blue eye trapped in his makeshift pack. The blue eye dashed toward Vashti and climbed onto her shoulder. Vashti was a little creeped out by the strange thing, but accepted it and the group continued toward the road.
The march to the road was uneventful and they arrived close to sundown. They questioned where to go, east to Raam and, possibly, a druid who could help Vashti? Or to the west, to the next gemstone? The group discussed it for a few minutes, before Vashti decided that killing Kalak was more important that correcting her abnormality. She felt confident that she could keep using the way to hold back the growth. They began marching west.
Soon after the sun had set, the group made camp. They set up their normal watch rotation, with Julius going first. Then, they slept.

In the morning, Kalino cooked the group breakfast. It was erdland meat, cactus, and some root vegetables. Vashti preached her morning sermon and created water for them. Even with their stores full, some of the group went hunting for water. Kalino and Julius found some. They drank the water Vashti created, along with the two gallons that were found.
An hour later, everyone, except Abilkisu, noticed movement among the large rocks on the side of the road. They readied their weapons and were not taken by surprise when a dozen gith surrounded them. Vashti attempted to parlay with them. The gith wanted the group's food and water, which the group refused to part with, so the battle began. 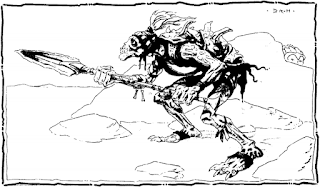 One of the gith was clearly the leader, so Vashti magically summoned her water hammer to attack him. Alaxander used the way to mentally punch the gith leader. Julius used the way to make himself invulnerable to physical attacks. Shade attacked with his bone alhulak and iron dagger. Kiara attacked with her obsidian wrist razors. The gith attacked with obsidian spears. Shade and Vashti took damage, as the gith were concentrating on Shade, Vashti, and Julius. Abilkisu used his light crossbow to defend his mistress. Kalino sliced one of the gith attacking Vashti with his chitin khopesh.
Vashti tried to hit the gith leader with her water hammer, but missed. She also tried to attack one of the common gith, but missed. She called to Abilkisu to attack the lead gith. Alaxander used the way to mentally punch the gith leader again. Julius used the way to begin charging electricity. Shade and Kiara attacked in unison and severely wounded one the gith. The gith retaliated, slashing Shade and Vashti. Julius was hit also, but was still immune to the effects of their weapons. Abilkisu fired his crossbow at the gith leader, but the bolt impacted the gith's armor. Kalino slashed the gith with his khopesh again.
Vashti kept missing everything she swung at and eventually had to fall back, when her bone club hit a rock and snapped in two. Abilkisu turned his attention back to the normal gith with a modicum of success. The lead gith invaded Alaxander's mind, forcing Alaxander to teleport away from the leader and attack the normal gith instead. Julius held as much energy as he could and used his sword on the common gith bandits. Kalino's chitin khopesh impacted with one of the gith's spears and broke at the handle.
Shade and Kiara continued fighting the gith, even when the gith leader used the way to control Kiara's body. It made her slash out at Shade and eventually made her drop her weapons and flee. Julius eventually pushed his way to the leader and touched his shoulder. Julius then released all of the kinetic energy he had stored up. The gith leader exploded and splashed much of Julius with blood and other fluids.
Surprisingly, the gith fought on. Even through the battle, Vashti could hear some of the gith cry out for their fallen leader. Although they were brave, the gith were no match for the group of heroes and fell to their weapons.
Vashti and Kiara magically healed the group and they marched on toward Urik. It was twenty minutes later when Shade put his palm to his face and groaned. When he was asked what was wrong, he answered that they had forgotten to loot the gith.