Surviving Under the Dark Dun - Temperature 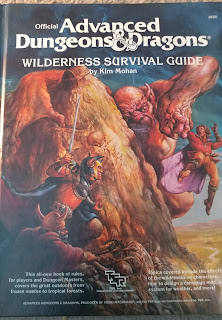 I was looking at my old copy of the Advanced Dungeons & Dragons Wilderness Survival Guide, by Kim Mohan, and I thought some of the information could be adapted to my Dark Sun game. Instead of writing a crazy long article that few would read, I decided to break it up into different sections. Bite-sized articles seem to be my forte.
This article is all about temperature, which I know some will laugh at. I can hear you now, "It's hot!" This, however, is not always the case. In the Wanderer's Journal, it is mentioned that nights on Athas get bitterly cold, even near freezing. Also, the Ringing Mountains have snow caps, which indicates freezing cold.
The rules presented below will be for AD&D second edition and will be for the sole purpose of making your Dark Sun a little more challenging for your players. I view Dark Sun as the "hard" setting for AD&D, so I do not hesitate to make my player characters a little more uncomfortable.
The coldest part of the athasian night will be right before sunrise and the hottest part of the day will be around mid-afternoon. These are simple generalities, the Dungeon Master will be the final arbiter of the in-game situation. These swings can be upwards of eighty to one-hundred degree difference in only a few hours.

Denizens of Athas have grown accustomed to the drastic changes, to a degree, and are usually much hardier than denizens of other worlds. Therefore, the standard temperature table in the Wilderness Survival Guide would not apply to Dark Sun player characters. Below is a chart I have designed specifically for Dark Sun characters. This chart assumes that the characters are not thri-kreen.

Temperature indicates the temperature of the character, which is not necessarily the temperature outside. This table to useful for characters who do not take precautions for the, often, overbearing temperatures of Athas. It must be noted that Thri-Kreen do not suffer from heat as much as other characters. For Thri-kreen, subtract 20F to calculate their penalties for temperature.
The STR, DEX, and CON columns indicate the temporary reduction of attributes for the afflicted character. Land Move indicates the movement rate of the afflicted character and Attack Rolls indicates the penalty to melee and ranged attacks.
These reductions can be reduced by drinking extra water. Every extra daily water requirement drank in the day reduces the penalties by one category, for temperatures above 110F. For example: A human in 111F to 120F temperatures could drink two gallons of water and act as if they were in 61F to 110F temperatures. A half-giant would need six gallons for the same effect.
In addition, these penalties can be ignored by succeeding at a Constitution check every thirty minutes. These checks continue for as long as the character's temperature is in the range indicated. Each additional check, after the first, has a penalty of -1. Failure indicates that the character is subject to the penalties outlined above, but may try again in 30 minutes. Muls gain a +2 bonus to this roll.
As the characters temperature changes, the penalties may disappear after a few minutes. The exact time is left up to the situation and Dungeon Master's discretion.