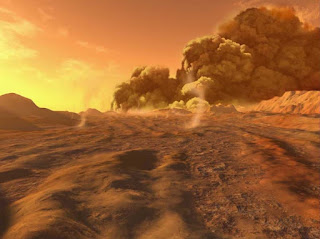 As the group continued walking, it was noticeable that the wind had picked up. Sand and dust were blowing heavily and the group had to cover their faces. The wind did not seem to be stopping anytime soon, but did did not seem to be getting worse either, so the group pressed on.
Soon, the group saw a huge armored wagon in the distance. They decided to move off the road and hide among the rocks and boulders, so the armored wagon would not see them. They soon could see that the wagon was flying a flag with two crossed scimitars on it. It seemed the wagon that had their mekillots eaten, and defiler killed, had received replacement mekillots. Once the wagon had passed, the group emerged from hiding and continued on the road toward Urik.
The wind calmed somewhat, as the sun touched the horizon. The group was pleased that they didn't run into any more problems. They set up camp in a defensible, off-road, location. Julius took the first watch.

The group awoke to the pleasant smell of Kalino cooking breakfast. Vashti preached her sermon and magically created some water. Shade found some water and, despite the mild, but constant sand blowing in the air, the group was in high spirits.
The morning passed, with only the wind and blowing sand to make the group's walk unpleasant. They took a break behind some large boulders during high sun and drank some water. When the temperature cooled slightly, they continued their march to Urik.
A few minutes later, Shade caught sight of some wagons up ahead. As they drew closer, he could see it was a six wagon caravan. He informed the group and they decided to move to the side of the road to let it pass. The group tried to look as non-combative as possible.
As the caravan drew closer, the group saw it was flying flags; they depicted a gold crodlu on a green field. They did not recognize the house, except Kiara and Abilkisu, but no one asked them. The group could also see that the wagons carried slaves. Vashti wanted to attack them right away, but the copious amount of guards made her second guess her strategy. 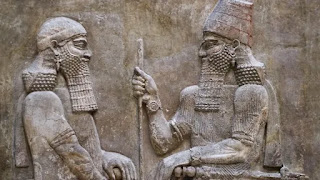 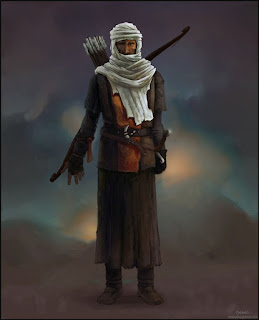 The archers fired at Julius, but the arrows just bounced off of him. Mohamed gave his guards instructions and departed, to go fight Shade. Guards had surrounded Shade and were dealing him a great deal of damage, but he was giving back as good as he was getting. When the guards were harmed greatly, they would retreat and let a fresh guard take their place.
Julius used the way to throw rocks at the archers, who were no longer shooting at him. The priests walked slowing toward Julius, as he walked slowly toward them. The archers rained arrows down upon Vashti's group, as they charged forward.
Alaxander teleported from his place on the rock to assist Shade. Mohamed ran up to Shade and slashed him with his kukri. Alaxander attacked Mohamed. Mohamed let Shade flee and began attacking Alaxander, along with numerous other guards.
Two of the guards gave chase to Shade, who was saved by Kiara. She killed one of the guards with her bone wrist razor and gave Shade a small orange pear of healing. Shade ate the pear and felt a little better. They both attacked the other guard and killed him.
Protected by Abilkisu, Vashti dodged the charging crodlu and ran up to the slave wagon. The other crodlu clashed with Kalino, who was nearly knocked from his feet. Kalino engaged the rider with his bone khopesh.
The priests attempted to charm Julius, but Julius shook off the clumsy attempt. He unsheathed his bone longsword and brought it down upon the priest's shoulder. In that moment, Julius channeled his stored up kinetic energy and multiple arrow-like wounds appeared in the priest's chest. The priest convulsed and fell to the ground, covered in his own blood.
Join us in two weeks for another exciting episode of Adventures Under the Dark Sun.