The Zhackal that Flew. A Dark Sun Fable. 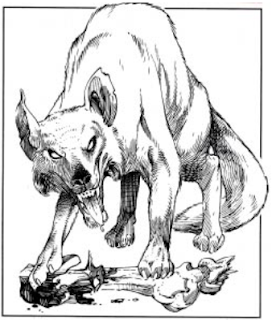 One day, a young zhackal was contemplating his life. He saw the flying creatures swoop through the sky. The young zhackal became sad and discontented. He wanted to see the world, but he was bound to the earth, unlike the nimble creatures who ruled the sky.
One day he met a pair of razorwings and told them that he envied their ability to fly. He explained that he wanted to see the world, but he was bound to the earth.
"We can help you to see the world," said the razorwings. "Grab this stick with your teeth and we will carry you. If we go high enough, you will be able to see the world around us. But keep quiet or you will be sorry."
The zhackal was very happy with his new friends and their plan. He bit the stick firmly with his teeth and the two razorwings grabbed hold of it, one at each end, and away they flew. They carried the zhackal above the city-states and mountains.
Just then a Kes'trekel flew by. He was astonished at the strange sight and cried out: "A flying zhackal! Well, this must be the king of all zhackals!"
"Why certainly—" began the zhackal.
But as he opened his mouth to say the foolish words, he lost his hold on the stick. He fell down to the rocks below. The razorwings then had a great feast of the zhackal's broken corpse.