Session Forty-Two: The Palace of Yaramuke 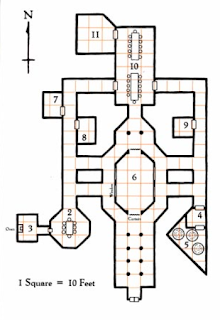 Jessel got the familiar, far away look in his eyes and bid his friends farewell. He opened a dimension door with the will and explained that earth was summoning him. He stepped through and vanished.
Knowing that time was short, the group began searching the palace as quickly as they could, while staying together. They cautiously moved down the corridors, with weapons at the ready. They saw a couple more of the pillars with the women carved into them.
They first found a large banquet hall, with worn and tattered tapestries hanging on the walls. They marveled at one that showed a forest and stream. The table, although badly worn was constructed of a strange red wood.
On the side wall of the room was a door. Through the door was a large kitchen. The tables and cabinets were still standing, and layers of dust covered every service. A large fireplace dominated one wall. They searched the kitchen and found some tin plates, bowls, and cups. They all grabbed a set for themselves.
In addition, they found many jars; most of which were empty or filled with unidentifiable fragments. They did find a couple of jars of preserved kank honey, a jar of whiskey, some salt, a little bit of stale water, and a fresh cherry. They were baffled that the cherry was still fresh and contemplated that it might be magical. Vashti also grabbed some empty jars, because they might need them later.
They continued their search and found three small bedrooms. Inside they found a silver comb and a small brass bowl. The fact that these treasures were left behind was shocking to the group. The rooms also each had a tattered rug and an ancient bed. One of rooms even had a silver and obsidian mirror, but it too large and cumbersome to carry.

They next found a small meeting room with a large map of the Tablelands dominating one wall. They marveled at it, but did not know a way to carry the fragile map with them. Off of that room was a small kitchen, which the group looted and found more kank honey.
As they emerged from the small kitchen, the group heard the echo of banging on the door. The group picked up their pace and began searching the seemingly empty palace at a faster rate. They rushed to the unexplored area and found a room with marble floors. The floor had large bowls carved it and the group questioned what they might be for. Alaxander knew they were for baths and the group was shocked, and slightly appalled, at the waste of water a bath would take.
The banging grew louder. The group had not found a way up or down in the palace, so they began a frantic search for a secret door. Not having time and with an enemy at their doors, the group split up. Shade and Kiara started searching the bedrooms, Vashti and Abilkisu searched the large kitchen, Kalino searched the small kitchen,  Alaxander saw a balcony and teleported to the upper floor, and Julius searched the bathhouse. They found no secret doors or openings of any kind.
Shade and Kiara searched the botanical garden next, Vashti and Abilkisu searched the west side of the banquet hall, Kalino searched the meeting room, Alaxander ran around the upstairs and saw that it was mostly large empty rooms, but did make note that there was a portcullis raised above the entry hall. Julius moved into the entry hall and prepared to hold off Abu and his minions. They again found no secret doors or openings of any kind. The banging on the door finally broke the stone bar holding it shut.
Shade and Kiara next searched the west hallway and Kalino joined them. Vashti and Abikisu searched the east side of the banquet hall, while Alaxander joined Julius in the entrance hall. Vashti discovered an opening in the north corner of the banquet hall. The door concealed a spiral staircase going down. She shouted to Shade. Shade, in turn, shouted to Alaxander and Julius.
Vashti, Abilkisu, Shade, and Kiara hurried to the newly discovered door. Kalino saw Alaxander and Julius preparing to fight and joined them. With one last bang, the doors to the palace swung open.
Julius and Alaxander could see Abu standing in the doorway and he had a group of workmen and undead with him. Abu smiled and greeted the three men guarding the entrance hall. He called them friends.
Julius and Alaxander prepared themselves to use the way and Kalino had his chitin khopesh ready. They did not reply to Abu's greeting. As Abu stepped inside, the statues suddenly came to life and shouted in the long forgotten language of Yaramuke.