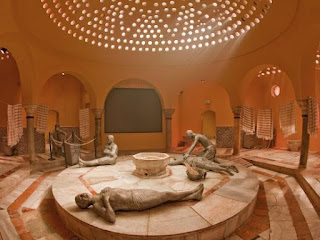 Here on Earth, we use water to keep clean. With water being a precious resource on Athas, you might ask, "How would an Athasian keep clean?" Like most things on the desert world, it breaks down to location, money, and social status.
Soap
Athasian soaps vary from city-state to city-state. Tyr creates soap made from animal fat and wood ash, while Urik creates soap from animal fat, vegetable oils, and alkaline salt. Balic uses a liquid soap mainly crafted from olive oil.

Cleaning Sand
Sand is used to clean clothes and some people. This sand is very fine and mixed with salt. This mixture bonds to dirt and sweat, then is brushed away with a cleaning brush, scraper, or rag. Clothes cleaned with cleaning sand are often scrubbed and then hung outside and beat with a rod, to remove residual dust and dirt.
Cleaning Tools
The most common cleaning implement used among all social classes is the cleaning brush. Cleaning brushes are made of a bone, wood, or metal base and stiff bristles. The bristles are generally made from stiff carru or aprig hair. These brushes are made for the sole purpose of cleaning dirt and grime from bodies or clothing. They may be used to clean other surfaces as well.
In addition, there are other tools used to keep clean. In Urik and Raam, pumice stone is used to clean the body, in all, but the most sensitive of areas. In Balic, a strigil is used to remove olive oil from the skin, taking dirt and dead skin with it. A strigil is a thin, wide, blunted hook, made of wood, bone, or metal.
Other scrapers are used by other city-state residents as well. These scrapers come in various sizes and shapes, but are all used in the same way. Before or after a bath, or any cleaning time, these scrapers are used to removed unwanted dirt and grime. After using cleaning sand, soaps, oils, or salts, the scraper is rubbed across the skin.
The common person almost always uses wood or bone cleaning tools, while wealthy individuals use metal tools. The wealthiest individuals often plate their tools in precious metals and embed them with gemstones. Simple cleaning tools can be purchased from any market, but fancy tools must be custom ordered. 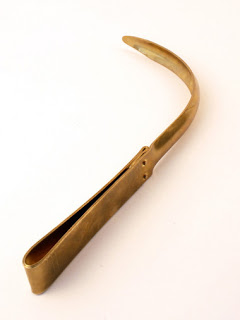 Bathing
Sorcerer Monarchs can use simple magics. such as a cantrip, to clean themselves. In addition, they also have enough money and power to waste water bathing. Likely, slaves or templars attend the monarch, washing them, and adding scents to the water. Any soaps used should not harm most plants, so after a bath, the water can be reused to water crops. Sorcerer Monarchs may bathe every, or every other day.
Nobles may be able to bathe, or use minor magics, similar to the sorcerer monarch, but less often, likely every few days. They always have a group of slaves attending them. After the bath, the slaves will remove the water and deliver it to the fields. Nobles may have private bath houses on their estates and schedule specific days for the entire family to bathe. Allied nobles may be invited to join the family, in order to build trust, and solidify alliances.
Incredibly wealthy merchants, from the dynastic merchant houses, likely bathe as often as nobles. They may then sell that water for use in crops, or if it isn't too dirty, animal consumption. The most vile houses may try to pass it off as fit for human consumption. They may have small bath houses in their estates.
Wealthy merchants and wealthy free citizens may bathe once a month. Between bathes, they may use cleaning sand on clothes and wipe themselves down with a cleaning tool, using a little water or oil, and natron, aka sodium bicarbonate. A single domestic slave would likely attend their master.
Average free citizens likely never have a bath in their life. They stay clean, by cleaning their clothes with cleaning sand and themselves with natron and just a touch of water or oil. How often they clean themselves this way, would depend on how much disposable income they have. Any slaves an average citizen may own would be too valuable to waste on bathing their masters. 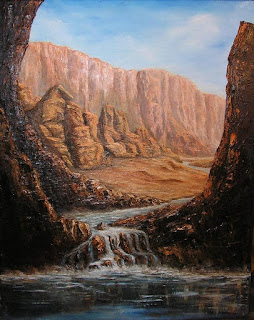 Poor free citizens never bathe and rarely worry about their own cleanliness too much. They may use cleaning sand on themselves and their clothes, if they can get some, but likely use regular common desert sand to achieve some sort of cleanliness. Poor citizens might have a single cleaning brush for the entire family.
Slaves are as clean as their masters want them to be. Domestic slaves are kept clean, because they interact with the family and their guests. Any slave kept inside of a city-state would have to have a minimal amount of cleanliness, as disease is know to spread due to uncleanliness.
The cleanliness of field slaves, who are not kept inside the walls of a city-state, is not considered at all. These slaves would clean themselves to the best of their ability, with whatever they could get their hands on. They could beat their clothes on rocks, or scrub them with sand. Their bodies could be wiped down with scraps of cloth, or sand and handfuls of straw, or some other plant material. Fleas and lice would be a major problem among unclean slaves.
Bathing outside of the city-states would entirely depend on the resources that are available to them. Likely, they would clean themselves as an average free citizen does. Due to the common knowledge that uncleanliness breeds disease, they would keep their slaves clean as well. It is highly unlikely that a resident of a village would ever be able to have a proper bath in their lifetime.

Cleaning Teeth
Salt or natron is used by the wealthy to scrub their teeth. These natural abrasive salts scrape the teeth clean. Wealthy individuals apply the salts and have slaves scrape their teeth with soft wooden sticks, or a rough woolen rag. Mint is chewed to freshen their breath.
Less wealthy individuals chew soft wood in order to remove food particles and clean their teeth. The poorest people use scraps of cloth to wipe their teeth. In addition, the poorest people often have the least refined foods. Due to this, tiny particles of sand and large pieces of vegetable matter, are not removed and end up cleaning the teeth, as the person eats the food. Of course, too much sand will eventually wear down the teeth of the eater.

While not entirely important for a Dark Sun game, keeping hygiene in mind helps build a realistic and immersive world. How would characters feel, if they were invited to bathe at an allied noble or wealthy merchant's estate? Perhaps the heroes of your game save a soap maker's wagon from brigands and are rewarded with a pound of soap each? Perhaps a young Balican noble had a special strigil commissioned for his betrothed and it has been stolen! Many adventure ideas and roleplaying encounters can be garnered from simple questions.
Posted by Rajaat99 at 4:00 AM