Dwarves of Athas Part 1: Forged in Fire and Stone


I am Karpos, human merchant from Balic. I have traveled the Tablelands and learned much of the various races that live here. I trade a great deal with the villages of North and South Ledopolus. In that time, I have learned a great deal of the Dwarves. Dwarves usually won't answer questions, unless it has to do with their focus. However, if they trust you and you buy them a few drinks, you may hear a story of two.
My friend Kallias is considered quite the beauty by her fellow Dwarves and she gets quite talkative after few mugs of mead. Seven mugs to be exact, which cost me more than I was wanted to spend, but after a long journey, I found her company pleasant and her tale fascinating.

Forged in Fire and Stone
Athas was created by a powerful being, simply called the creator. Others have named the creator Durgonis, but that's nonsense. The creator had no name. The creator was both male and female and had hold of all of the elements. This creator created the sky, the stars, the moons, and Athas itself, but it wasn't like Athas today. It was a bitterly cold wasteland. There were no cities, or even villages, as no intelligent race existed. The creator looked upon his creation and wept a single tear, for there were no other beings to enjoy his creation.
This one tear fell into a volcano. The tear was changed by the molten mixture of rock and fire, it became life. This new creature crawled from the molten lava and was cooled by the cold air. The creator called this creature, which was made of all four elements, Dwarf and named him Torran. Because of the cold, however, Torran had hair to keep him warm. Torran had a love of creation, like the creator itself. Together, they created more.
They created more Dwarves and then the other races. Dwarves had a greater portion of Earth, to make then strong and resilient. Humans were crafted from equal amounts of each element to make them balanced. Elves had a greater portion of air, to make them swift, and Halfings had a greater portion of fire, to make them fierce. 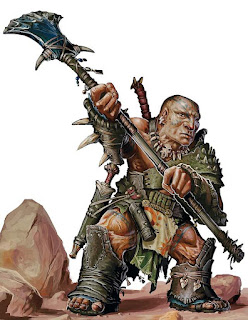 It was here I interrupted and asked her what about Thri-Kreen, Pterrans, and Nikaal. She dismissed my questions with a wave of her hand. I suspect she did not know the answer, but was too proud to admit it.

I tried to ask how Dwarves lost their hair and other questions, but she refused to answer. Other Dwarves told me that Kallias was wrong and Dwarves have always been bald, or that Dwarves cast away their hair when Athas become too hot. I even had some tell me that Dwarves are not bald, they shave everyday. Although I think the last explanation was just Dwarves having fun at my expense.

Note from Rajaat99: I know I am not much of a writer, but I hope this was enjoyable. I plan on writing various articles about the Dwarves of Athas and combine them into an ebook. I feel that Dwarves really should have got their own book. Comments and criticism are welcome and encouraged.