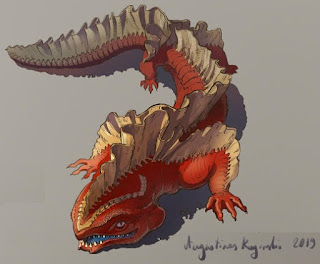 Frilled Flame Lizard
The frilled flame lizard is a two-foot long lizard. Its body is covered in red scales and from the top of its head to the tip of its tail runs a large tan colored frill. This frill collects heat from outside sources to warm the creature.

Ecology
Frilled flame lizards will eat carrion, but prefer live prey. They generally eat insects and rodents, but will attack larger prey, if defending their territory.
The meat of a frilled flame lizard is inedible, as it charcoals upon the creatures death. It's red skin may be taken for decoration, or clothing, and can sell for up to one ceramic piece in most city-states.
Fire clerics tend to have a soft spot for these creatures and are loath to harm one.