The Dwarf, the Man, and the Coin Purse. A Dark Sun Fable. 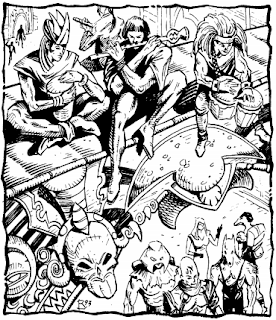 A dwarf and a human were walking along the road near the dancing gates of Nibenay. The dwarf became excited and picked up a large purse from the side of the road.
"Look how lucky I am!" The dwarf exclaimed. "This purse is full to bursting and must be full of ceramic pieces. Maybe even a silver or two."
His human companion looked at him irritably. "Don't you mean look how lucky we are?"
The dwarf pressed the purse closely to himself. "No. There is no we. I found it and it belongs to me!"
Suddenly, a shout was heard from within the gates and fingers were pointed at the pair of travelers. Cries of "thief!" could be heard and some guards and a templar were moving quickly toward the dwarf and his companion.
The dwarf looked around in a panic. "What are we going to do? They think we stole this purse!"
The human stepped away from the dwarf and replied, "No, there is no we. You found the purse and it belongs to you."
In a panic, the dwarf tried to run, but was quickly caught by the guards and templar. Unburdened by the full coin purse, his human companion was able to flee easily away from the city.